skip to main | skip to sidebar

First of all, thanks to everyone who helped us out in America. It's definitely the most fun tour we've been on, and it was great to spend two weeks in a van with Daniel Lupton, Josh, Mike and Kyla. I would say we would do it again soon, but we're not. Out with a bang.
On that note, we have a bunch of gigs coming up soon. We may add one or two more, but that will literally be it. You know what to do...
Thursday 2nd August
The Grosvenor, Stockwell, London w/ Absurdo, Crosta and Knife Or Death.
Friday 10th August
The Stags Head, Hoxton, London w/ Role Models
Saturday 15th October
The 1 In 12 Club, Bradford w/ Inservibles, Anthrax, Glam and a whole bunch more as part of the Means To An End Fest.
Saturday 22nd October
The GYC, Guildford. - This is our final gig.
Also, we often get asked about other bands. For the record, these are the currently active bands we also play in:
Information is probably somewhere on the internet if you look for it.
Posted by The Shitty Limits at 10:58 3 comments:

So, our latest (and final) record has just been released on La Vida Es Un Mus Discos. Six new tracks in 11 minutes, it looks like this:

I don't have a copy on my computer right now, but when I do, I'll upload the whole thing for anyone who wants it as per usual with our releases. The first press is just over 500 copies, with some on blue vinyl for those who are into that sorta thing. Sorry State Records will have an American version out shortly as well.
You can order here: http://lavidaesunmus.com/prestashop/product.php?id_product=765
We'll also have these on tour, or check your favourite distro in the coming weeks.
Posted by The Shitty Limits at 15:36 No comments:

We're going on tour soon. I'll post the dates up for that at some point. Here is one of the flyers.

We're also recording a new record next week. It'll be out a few weeks after that. I'll post more info when it's done.
Posted by The Shitty Limits at 06:10 No comments: 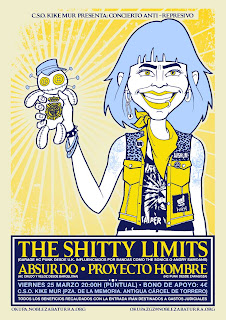 I figured out how to put some songs up here:

Since myspace is now impossible to deal with, here's our upcoming gigs:
THURSDAY FEB 24th
- The Barfly, Camden w/ Moral Dilemma and Pettybone. (I think we're playing second?)
- The Old Blue Last, Hoxton w/ Not Cool (We're playing later here)
MARCH 25-28 2011
We go to sunny Spain to play some gigs with Absurdo, at least two of us will get badly sunburnt, regardless of climate. Does that band Gas Angreb still exist?
SATURDAY MAY 21st
The Grosvenor, Stockwell w/ Social Circkle
WEDNESDAY May 25th
Brighton w/ Social Circkle and Big Kids
JUNE 2011
Chaos In Tejas
There's a bunch of stuff in the works for March/April right now. If you want us to play a gig email bewarethelimits@gmail.com and we'll aim to get back to you within a few days. Three quarter's of the band's jobs involve shift work, so sometimes it can be hard to confirm stuff right away.
We're also going back to the USA in June to play a bunch of gigs. Email Daniel on sorrystate@gmail.com if you'd like to help.
Thank you to everyone who helped out on the Limits / Hygiene weekender a couple of weeks back, we had a great time.
Top Five:
I wanted to post some pictures up here, but to be honest I couldn't resize them, ask us to see our holiday snaps one day.
Posted by The Shitty Limits at 02:48 1 comment:

Released April 2010. 394 copies pressed. Available from La Vida Es Un Mus Discos
This 7" was put together extremely quickly after Paco suggested that we do a 7" for Record Store Day along with Hygiene. Last Orders were done in one practice, then recorded by Louis on a 12 track in his house a couple of days later. Selling Point was written by Louis, then sent over email to the rest of us to learn. A month after this record came out, we still haven't played this track together as a band. The records were pressed within a week and a mock up sleeve was done for a gig in Guildford, knocked up in about 10 minutes. We ended up using it for the standard record too. Not a perfect record by any stretch of the imagination but definitely fun to be a part of.
Tracklisting:
1: Last Orders
2: Selling Point
Download here: http://www.megaupload.com/?d=YKOYLSK5
Posted by The Shitty Limits at 03:35 No comments: